SEPT. 30, 2016 (Agua Dulce, Calif.): NORRA has been flooded with a huge wave of entries for the 50th anniversary celebration taking place in 2017. Hours after registration opened, the entries were stacking up in record numbers. After only 6 days, the numbers are nearly the total of last year’s event which was also a record for entries. Pro racers, icons of the sport, past winners of the rally, and first timers too are all chomping at the bit to compete in “The Happiest Race On Earth!” 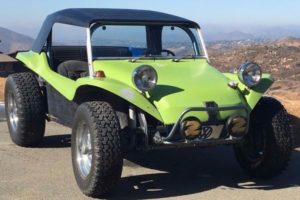 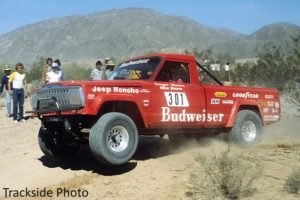 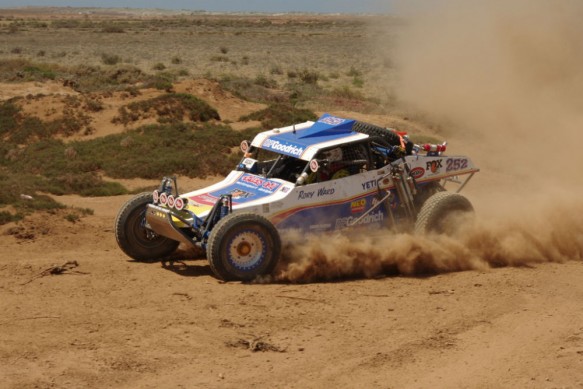 (Above) Throwing it back, Jon Steinhilber’s 1965 Meyers Manx entry in the Pioneer Buggies category is a perfect example of the original flavor for the 50th Anniversary of off-road racing. Likewise, the restoration of popular race vehicles from years past like that of the ex-Roger Mears Jeep Honcho by Jeff Furrier and the return of the restored DirtTrix add to the overall celebration of this years event.

One of the coolest cars competing this year is the 1965 Meyers Manx of Jon Steinhilber. You can’t get much more authentic than an old Meyers Manx. Jeff Furrier is racing to get his ex-Roger Mears Budweiser Jeep Honcho restored for the race. Anyone who is following his project knows he is pulling out all the stops, the truck is very nice! The DirTrix car that was restored by Rory Ward has a new owner. Ted Baker will be racing the car against the other Challenger Buggies. In the Vintage Production Cars class, it will be David against the Goliaths. Lyman Scherer is racing his 1959 TriumphTR3 against a bevy of American muscle including Renee Aguirre’s 1964 Ford Galaxie, Jim “Rooster” Riley’s 1957 Chevy, Floorian Oger’s 1971 Nova, and John Swift’s 1972 Olds Cutlass. The Historic Era has some heavy hitters who are already registered. Mark Post will be driving his 1992 F-150 Trophy Truck as well as Jim Bult in his Dodge Trophy Truck and Dana Dague in his recently restored 1983 mid-engine Raceco Trophy Truck. 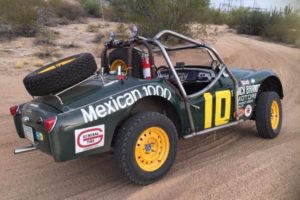 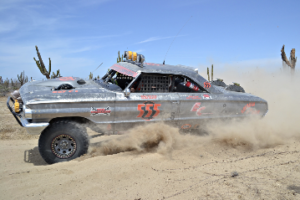 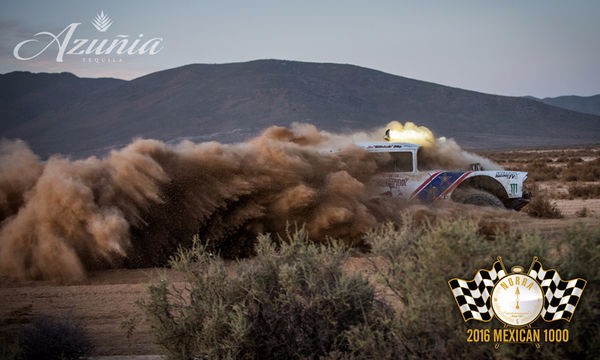 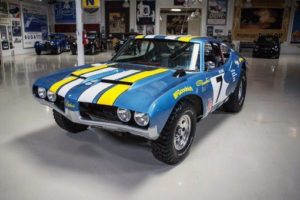 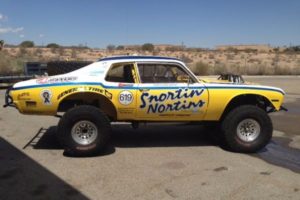 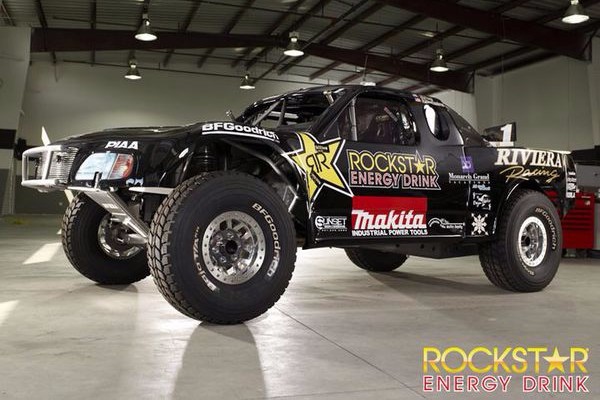 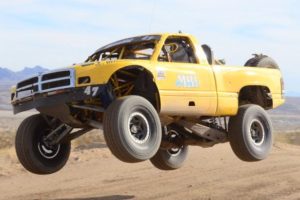 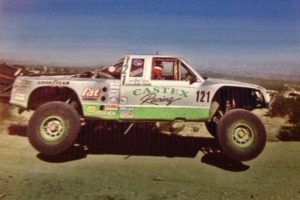 Mike Shatynski is back supporting Racing for Vets and Warfighter Made in his light strike vehicle. He will have some stiff competition from Robert Blanton, also with Warfighter Made racing the Flyer 22 military vehicle. Renee Hudson and Heather Bonanni will be getting dirty for the Ta-Ta’s. They race their Polaris RZR in the top UTV class to raise money for breast cancer. They have raised over $25,000 for the cause.

(Below) Mike Shatynski has raced the “Flyer One” light strike vehicle the past couple NORRA Mexican 1000 Rallys but now has some fierce looking competition with the “Flyer 22”. Anyone else willing to pull together a military vehicle for the challenge? Juxtapose that brawn with busts, Hudson and Bonanni racing for double the fun! Join the cause- donate, support or enter to raise funds and awareness as well. 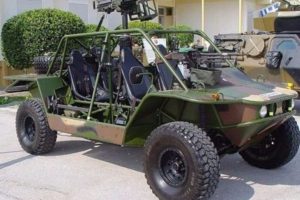 (Above) Three historic McMillin vehicles are entered in the 50th Anniversary running. THREE! In three different categories. Here’s your chance to rub shoulders (apologies, no pun intended Mark) with off-road racings legendary family who has been in it since its inception.

The NORRA Mexican 1000 honors the past while also forging the future. Competitors in this year’s historic event will create the stories and tall tales that will be shared around the camp fire by future generations. The Mexican 1000 is the genuine deal. The words that we use today to describe the sport, “Off-road Racing” were conceived by Mike Pearlman for the original event in 1967. Today, the Mexican 1000 captures the same challenge, adventure, fun, and Mexican hospitality as the original race; nothing else compares. 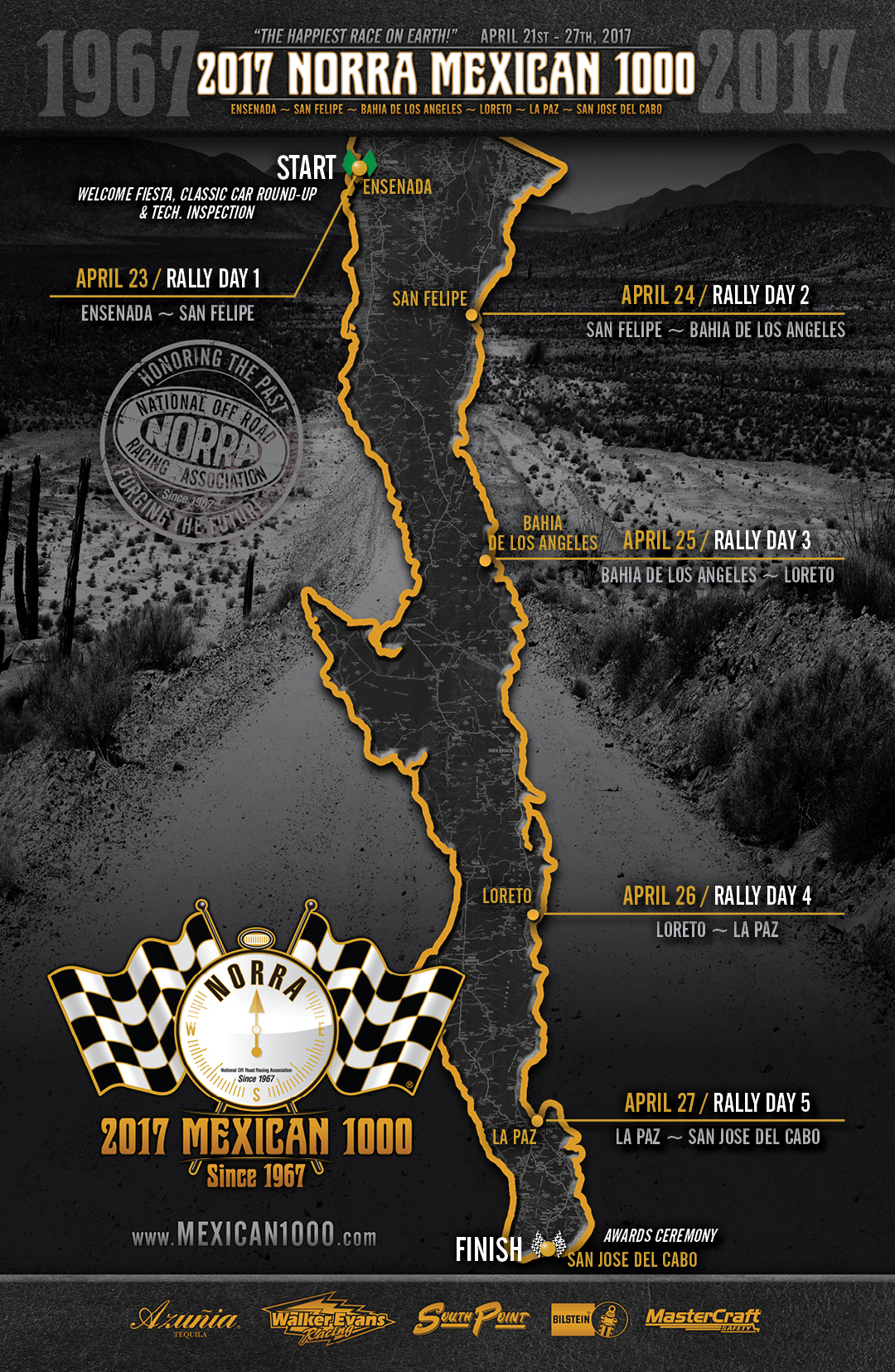 For the 50th anniversary, the first day’s stage will head from Ensenada to San Felipe. Competitors will have time to relax and have some fun in San Felipe before calling it a night. New this year will be several benefits aimed at the racers. Additional Insurance is available, (increased medical insurance to $10,000, legal support, and bail bonds), and there is a new scoring and timing system that uses the latest technology to increase safety. There will be FREE MAG-7 pit support for EVERY entry including cars! The Race for Cash will have an optional daily jackpot which means 6 opportunities to win plus the overall in your category. 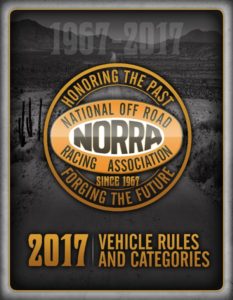 BECOME A PART OF HISTORY
Don’t miss out on the greatest adventure you will ever experience!
Login to your existing NORRA account, or create a new NORRA account at www.norra.com/member/login. Have picture images (.jpg, .bmp, or .png) of your Driver’s License, Passport and Health Insurance Card ready to upload to your profile. Have your race radio frequency handy as well as your emergency contact phone numbers. Determine what category your vehicle should be competing in (refer to 2017 rules at www.norra.com/rules_current ). Update and complete the ‘My Profile’ and ‘My Vehicle’ sections of your account. Once, pre-registration opens, it should be as easy as selecting your vehicle and choosing your preference of payment option. Upon completion of registration you will receive a confirmation email and see your entry online.

PROFILE/ENTRY DETAILS
In order for your Team/Vehicle to be highlighted for this year’s event – complete all information about your entry and submit photos when registering. (See details below.) Incomplete information and/or lack of photos may result in your registration not being shown nor listed in association with the 2017 Mexican 1000 Rally.
• Vehicle Number
• Vehicle Name
• Vehicle Model/Manufacturer (Supply Picture)
• Team Name
• Engine, Trans, Fuel Specs
• History of Vehicle
• Driver Of Record Name, From, About (Supply Picture)
• Co-Driver (s) Name, From, About (Supply Picture(s)
• Special Thanks – Sponsors, Family, Etc.

PHOTOS: Photos should be cleared with any outside photographer before submitting. (NORRA is not to be held responsible for unlicensed photos) Please submit 1-3 digital photos of your vehicle in .JPG or .PNG formats. File size should be around 800 pixels wide (or larger) and at least 72 dpi (or higher). In doubt? Submit the highest file size possible that is able to be sent via email.

Pearlman’s late father Ed and others established the first running of the NORRA Mexican 1000 off-road rally in November of 1967, which eventually became internationally recognized and evolved into the Baja 1000 in the mid-1970’s.