Jeepspeed Series Bigger and Better in 2017 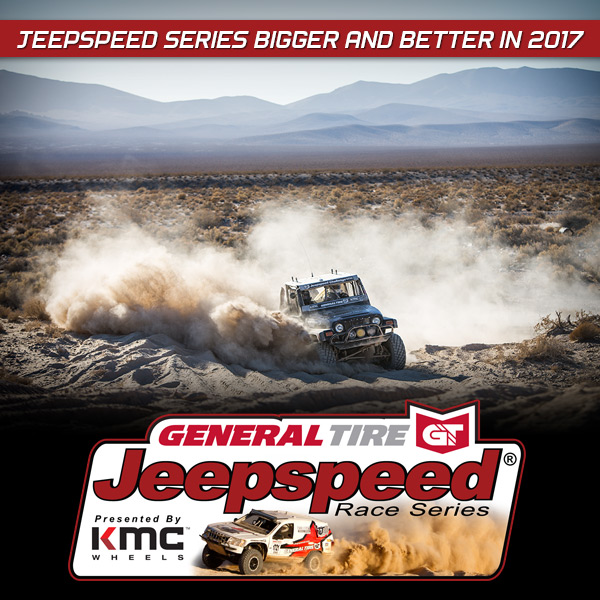 2017 will be a huge year for the General Tire Jeepspeed racing series presented by KMC Wheels. Established in 2001, it is the longest running Spec Class in desert racing. Its affordability, sensible rules, and strong backing from General Tire, KMC Wheels and many other supporting sponsors, make it very popular with budget minded racers who crave competition. Jeepspeed has big rewards for racers in all 3 divisions of the Jeepspeed Challenge. Over $50,000 in cash and Jeepspeed product awards are up for grabs in 2017. 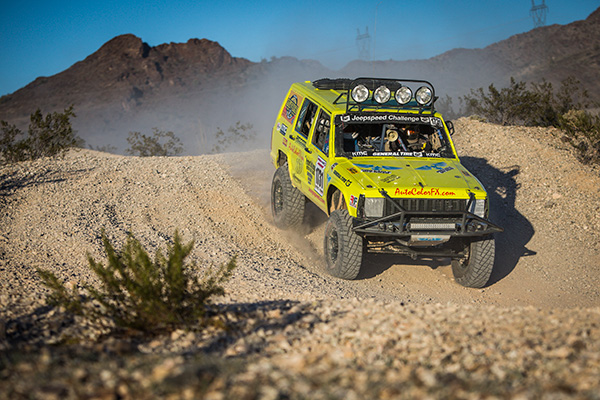 The General Tire Jeepspeed Challenge presented by KMC Wheels will run the Best In The Desert six race schedule. Best In The Desert holds a diverse series of races in the Southwestern United States. Each racer’s best 4 results from the 6 race series will be used to calculate their year-end points position. Teams must participate in a minimum of 4 events to qualify for a Jeepspeed championship. There are 3 divisions in the Jeepspeed Challenge; Division Classes 1700, 2700, and 3700. You can find full rules posted on www.jeepspeed.com. There will be 3 division Champions and the team with the most points will be crowned the Overall Jeepspeed Challenge Champion. 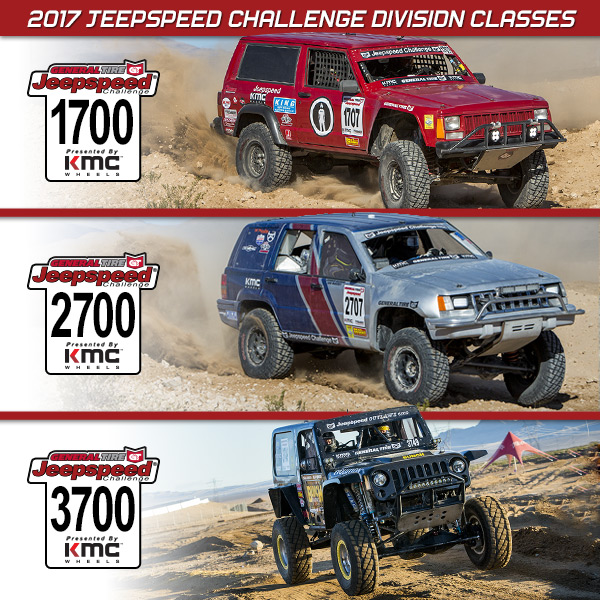 The season opener will take place Feb 3rd and 4th at the famous Parker 425 in Parker, Az. Thanks to Rugged Radios and SouthWest Boulder & Stone, winners of each division will each receive a $1000 cash bonus on top of the normal payout; plus a new set of General Grabber X3 tires, and KMC wheels. 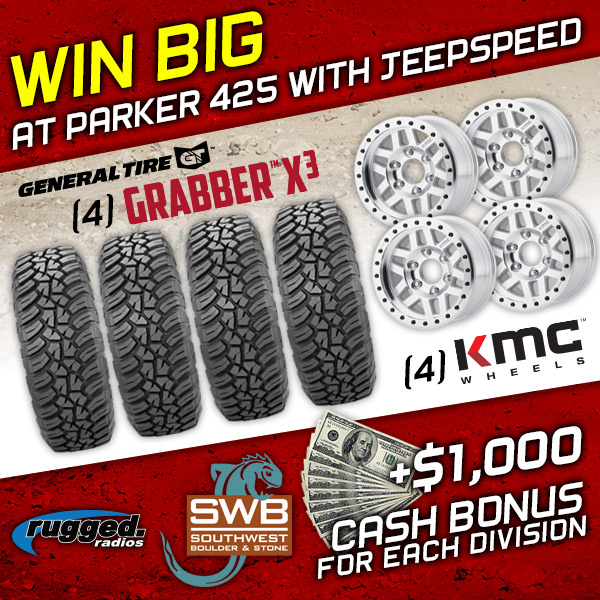 The General Tire Jeepspeed Racing Series is proud to announce a huge event for the summer of 2017, the Jeepspeed Open presented by Currie Enterprises. The Run What You Brung Summer Show will be held in conjunction with the M.O.R.E. night race on July 14-16 in Barstow, California; one of the most popular races of the year. Jeepspeed will host The Jeep race everyone has been waiting for. No tire restrictions! No wheel restrictions! No burdensome rules, everyone can join in on the fun! Vehicles need only to pass technical inspection to insure they satisfy the race organizer’s safety requirements. The event is open to any desert race vehicle recognizable as a Jeep, Dodge, or Mopar appearing vehicle. Teams will be grouped according to tire size. More details of this exciting weekend for all Jeepers will be coming soon. 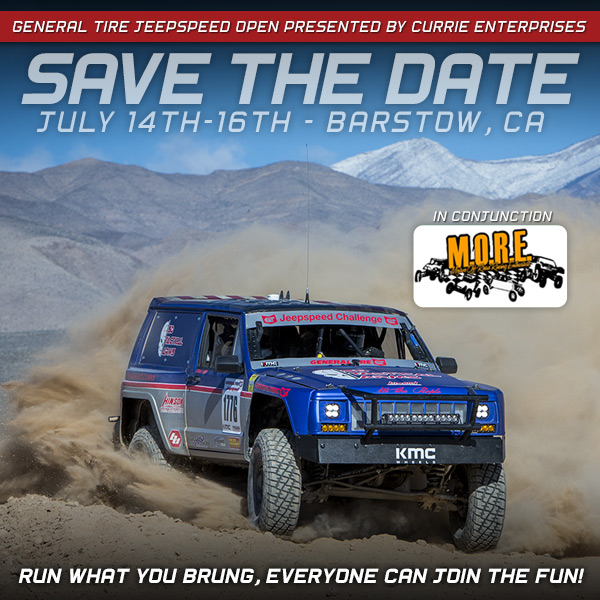 Want to join the fun? Used Jeepspeed vehicles can be purchased at the Jeepspeed website but truthfully, one of the biggest draws to the Jeepspeed series is the opportunity for every competitor to build their own vehicle as long as it fits a few simple rules. It attracts a wide range of Jeep and Dodge vehicles which makes for some great friendly rivalries. Strong support from sponsors and the ability to build your own vehicle makes it affordable, competitive and very exciting. The Jeepspeed series provides some of the most fun and competitive racing in the desert without breaking the bank. 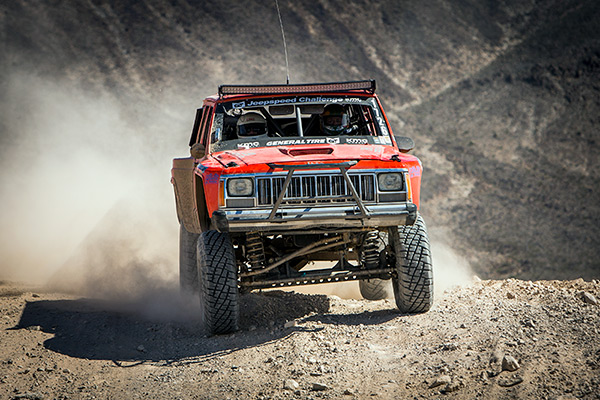 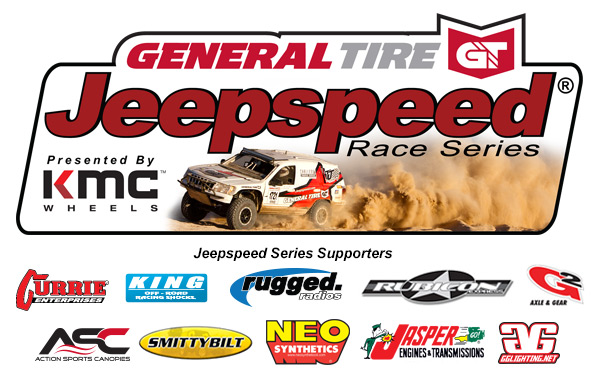 About Jeepspeed
The Jeepspeed series is a competitive, cost effective series that has pitted Jeep vehicles against each other on challenging desert courses since 2001. Unlike the more expensive spec racing classes, there is no obligation to purchase your race vehicle or parts from the series organizer. You build your own vehicle the way you like as long as it fits within the rules. Jeepspeed offers the most fun and closest racing in the desert today. Jeepspeed series is supported by General Tire, KMC Wheels, Premier Chrysler & Jeep, Currie Enterprises, King Shocks, Rugged Radios, Rubicon Express, G2 Axle & Gear, Smittybilt, GG Lighting, Jasper Engines, and Howe Performance.

About KMC Wheels
KMC is redefining performance on and off  the asphalt with innovation, style, and a relentless pursuit to confront possibility. We are for the rule-breaking, game-changing individuals who defy conventional
thinking in motorsports and use machines to pull off  the impossible.